Human head lice (Pediculus humanus capitus). The one at the top is an adult, and the other louse is a nymph.

Since the year 2000, our lab has been involved in the development of a safe, effective, non-chemical treatment for head lice, Pediculus humanus. These pesky critters are a serious concern of parents and teachers alike. One in four K-6 kids in the United States gets head lice at some point, leading to missed school and work by parents who must stay home trying to deal with the problem. Head lice have become far more common in recent years because they have evolved resistance to many of the popular head lice shampoos. And the problem continues to grow.

In 2004, with funding from the Utah Centers of Excellence program, we established the Center for Alternate Strategies of Parasite Removal (CASPeR). The sole purpose of the center was to develop a device capable of controlling head lice with carefully controlled and directed warm air. This machine, which we named the LouseBuster, has proven to be a major success. It is currently being marketed by Larada Sciences Inc., a University of Utah spinoff company based in Salt Lake City.

In 2006 we published the results of our research in the journal Pediatrics. The article and accompanying news release sparked enormous interest from the international news media. It had the second highest level of coverage of any news release issued by the University of Utah during the year 2006: Further details of the media coverage - here and here. And a highlight in the Innovations newsletter "Practical Applications of Basic Research" - here.

In 2011 we published the results of clinical trials for FDA clearance of the LouseBuster device.

In 2012, NPR's All Things Considered did a segment on the LouseBuster that can be found - here.

In 2013 the name of the LouseBuster was changed to the AirAllé Device (pronounced air-a-lay) as part of an expansion involving several AirAllé products.

Please direct all inquiries about the device to info@laradasciences.com 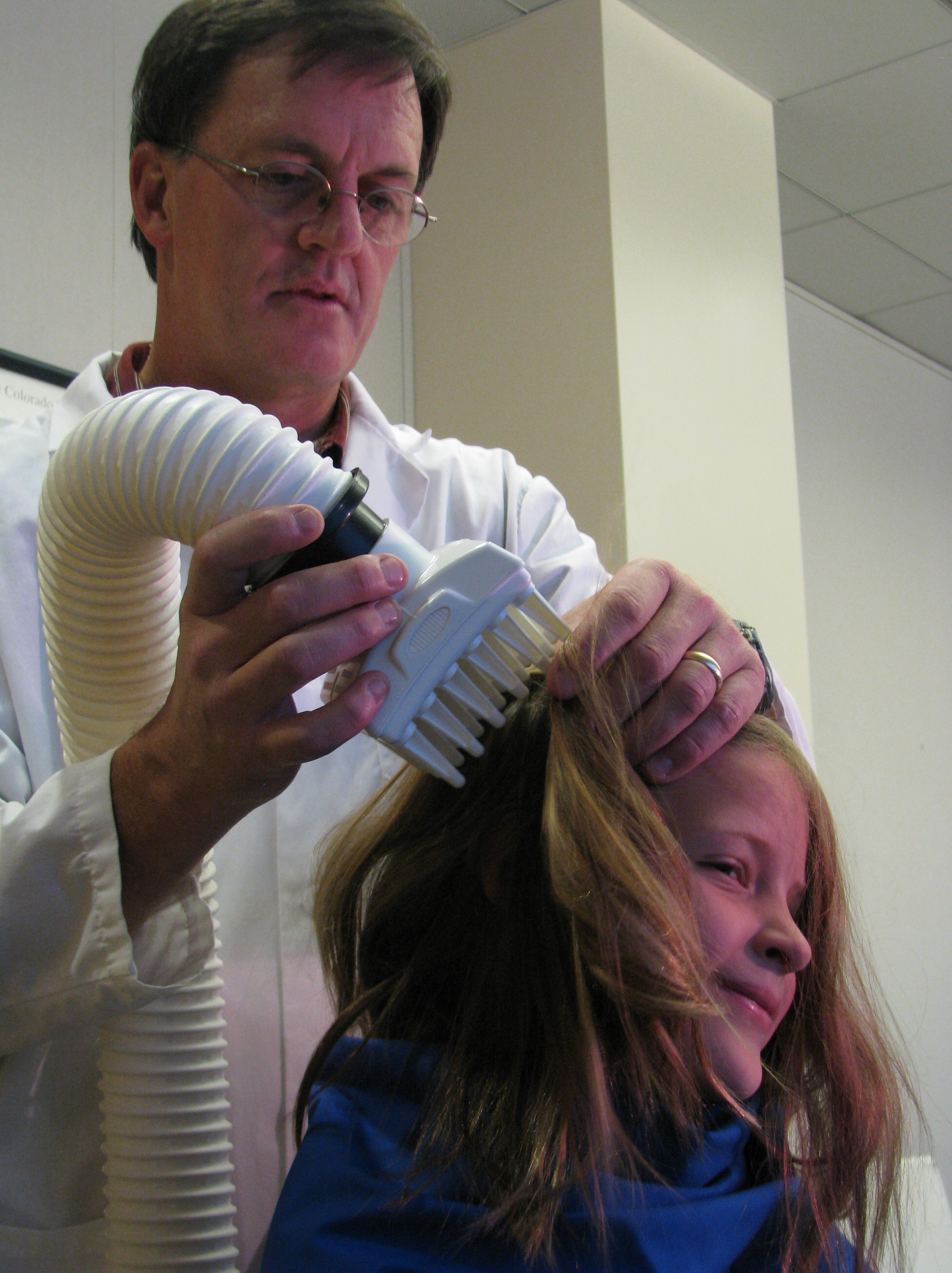 Dale H. Clayton, Ph.D. demonstrates the use of the heated-air device for the control of human head lice.

A more detailed history of the LouseBuster:
The LouseBuster concept originated in the laboratory of Dr. Dale Clayton at the University of Utah, where he is a professor in the Department of Biology. Most research in Clayton's lab concerns basic aspects of the biology of birds and their feather lice. During the 1980's and early 1990's Dr. Clayton successfully cultured lice on captive birds, such as common pigeons, for basic research purposes. However, when he moved his lab to the University of Utah in 1996, from Oxford University in England, he encountered great difficulty keeping lice alive on captive birds. Perplexed, he consulted colleagues working on other small insects, such as fruit flies. He was informed that, because of Utah's arid climate, they too had difficulty keeping insect cultures alive. The large surface to volume ratio of these small insects apparently makes them vulnerable to desiccation in such an arid climate. One solution was to install steam lines in insect culture rooms to increase the ambient humidity. Upon installing such lines in his bird rooms, Clayton found that the problem was resolved and feather lice were relatively easy to culture. Around this time Dr. Clayton's elementary school children contracted head lice that appeared to be resistant to chemical shampoos. Clayton's experience with pigeon lice suggested it might be possible to control head lice by reducing the level of humidity near the scalp. The question was how to accomplish this trick.

Over the next several years a variety of methods were tested in Clayton's lab, ranging from the use of chemical desiccants, to heat caps fitted with electrodes, to rice bag caps heated in a microwave, to various hair dryers and blowers up to the size of a leaf blower (don't try this at home). These approaches were tested on student volunteers in the lab - including Clayton's own children - many of whom were temporarily infested with small numbers of head lice that could be removed quickly with a nit comb at the end of each test. These tests showed that it is not feasible to control head lice using existing hair dryers. Although bonnet style hair dryers heat the hair and scalp, static heated air does not kill lice (unless it is much hotter than a person can tolerate). A combination of heat and considerable airflow is required to desiccate the lice. But conventional blow driers do not work well either. This is because they tend to mat the hair, effectively protecting the lice from the effects of the moving, hot air. Blow driers are also dangerously hot and the user can easily burn the subject being treated (the LouseBuster is considerably cooler than a blow drier).

Following months of tinkering, it looked likely that it might be possible to kill head lice and their eggs with a novel, purpose-built device that combines fast moving warm air, a precise angle of application, and the right duration of treatment. Working out the specifications required a good deal more experimentation over many more months using custom engineered LouseBuster prototypes. The culmination of this work was publication in 2006 of a paper in the journal Pediatrics reporting data on the relative success of the different kinds of hair dryers, compared to the LouseBuster, for killing head lice and their eggs. An accompanying press release by the University of Utah generated a feeding frenzy of worldwide media attention that validated widespread interest in such a device, and the critical need for it.

From 2000-2003 work in Clayton's lab on head lice was funded by a series of small grants from the National Science Foundation, the National Pediculosis Association (Boston), Primary Children's Medical Center Foundation (Salt Lake City), and the University of Utah's Funding Incentive Seed Program and Technology Commercialization Program. In 2004 and 2005 the project received major funding from the Utah Centers of Excellence Program. In 2006 the LouseBuster concept was licensed by Larada Sciences Inc.